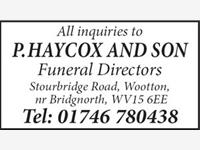 Light a Candle
Originally printed on July 24, 2021 in the Shropshire Star.
Viewed by 121 Visitors.

Husband of the late Margaret. Loving Dad of Paul and Gareth, Father-in-law of Chris and the late Bev. Much loved Grandad of Adam, Daniel and Victoria, Great-Grandad of Ezitai.

Funeral Service at Stourbridge Crematorium on Tuesday, August 3, 2021 at 12.20pm.

Family flowers only. Donations if desired for Cancer Research UK, for which purpose a collection box will be placed at the Crematorium or can be sent to the Funeral Directors.

24 July 2021
Please accept our condolences at this difficult time.